Would you like to switch to the accessible version of this site?

Don't need the accessible version of this site?

VAPING AND THE EFFECTS 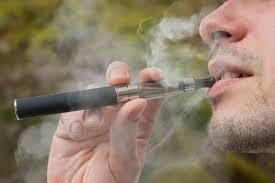 When you were a child did you ever put two fingers up to your mouth and pretend it was smoke coming out when the air was cold and you could see your breath? Smoking in general may seem trendy to a young person but this habit has dangerous effects on a person’s body. Electronic cigarettes, which are known as e-cigarettes or vapes, are believed to be a safer alternative to the original cigarette. However, research is proving that this is not be the case. Since this trend has become increasingly popular within the last decade, there are still unknowns regarding its long-term effects.

How does vaping work?

An e-cigarette does not need a lighter to work because its power source is a rechargeable lithium battery. The liquid that it contains is vaporized inside a chamber that heats up where the user inhales. It is the liquid cartridge that contains the nicotine, which is mixed with a base that includes flavorings and chemicals. The flavorings especially appeal to the younger generation.

Those who advocate for e-cigarettes would claim it is a much safer habit than smoking a traditional cigarette because they do not contain all the terrible, cancer-causing chemicals that is in tobacco smoke. Regardless of how this product is marketed, e-cigarettes still contain harmful chemicals, one of which is nicotine. Nicotine is an addictive substance, which means the user can never get enough. Studies have shown that no vaping device is without nicotine because even those claiming “nicotine free” still have traces of the addictive substance. Since teenage brains are especially susceptible to nicotine and its addictive properties, it can lead to a life of poor health, and financial struggles.

Vaping effects on the body

Brain:The nicotine that you inhale from the e-cigarette releases chemicals that make you “feel good.” The chemicals cause changes in your brain, leaving you addicted and constantly craving more. E-cigarettes can also cause light-headedness, dizziness and even tremors.

Lungs:The nicotine that you are inhaling can cause major damage to your lungs. It contributes to rapid, shallow breathing, permanent damage to the lungs, and increased chances of lung disease and lung cancer. Some vaping devices have a flavoring agent called diacetyl, which has been linked to lung disease.

Heart:Vaping causes your heart rate and blood pressure to rise, which makes your heart work harder to get adequate blood flow and enough oxygen to cells. Over the long-term, this can result in a greater risk of a heart attack and stroke.

Behavior:Nicotine offers the brain a sense of “feel good,” all the while causing permanent alterations to a person’s behavior. It leads to the reduction of impulse control, attention span and the ability to just think, as well as mood disorders.

Vaping effects on teeth and gums

Gums:Nicotine is absolutely not your friend, even if your brain is screaming for it, your body can’t handle it, including your oral health. Nicotine alters your blood flow through your veins by reducing the amount. Therefore your body, including your gums, doesn’t get sufficient blood flow, which reduces oxygen and nutrients your gums need to remain healthy. Nicotine basically chokes out your mouth tissue from the blood and oxygen it needs to survive. Since the gum tissue can’t survive your gums will begin to recede. Nicotine increases the chances of gum disease. Common symptoms of this disease include halitosis, which is consistent bad breath, red, irritated, bleeding gums, tender or swollen gums, loose or loss of teeth as well as gum recession.

Saliva:Saliva helps with the digestive process. However nicotine prevents the production of it. When your body doesn’t adequately produce saliva bacteria builds up, you will end up suffering from dry mouth and tooth decay. When your mouth is chronically dry it’ll result in bad breath and mouth sores.

Broxism:When your body is influenced by nicotine it stimulates your muscles. If you naturally grind your teeth nicotine will make it worse. If you don’t normally grind nicotine may cause you to start. Bruxism is involuntary habitual grinding, gnashing, or clenching teeth. When this condition is left untreated it can lead to major tooth damage and oval health problems.

So many of these health and dental risks are similar to tobacco cigarettes that it truly is a misconception that e-cigarettes are healthier. Vaping may be increasing in popularity but as its use raises so does research, and current research suggest that vaping leads to a variety of negative effects on your body as a whole. Since vaping is such an addiction habit due to the nicotine it contains it may be best to stick with just seeing your breath when in the cold than to use this device to blow out smoke. Your health and the risks it may bring aren’t worth it!

Find us on the map